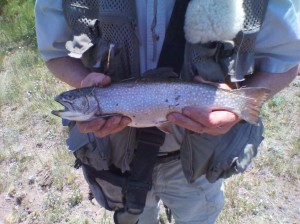 Last month my family took a trip to Creede, CO for a relaxing week in one of the most beautiful landscapes I have ever seen. It was a terrific week. Lot’s of sleeping in, playing games, long walks and of course…fishing. For me, fishing is much like golf. I am constantly amazed at people who seem to master the sport. At the same time, I constantly try not to get frustrated with my consistent lack of ability. This scenario is only magnified when I am out with my dad. He regularly out performs all other fishermen in our cabin combined. On this trip, I believe the count was something like: Dad: 20 and Landon: 0!

Although he does like to tell his stories of victory, Dad is a good sport about it. He doesn’t rub it in  or make me feel like a bigger loser than I am. However, there are those rare moments that have to be shared. Moments of sheer excitement and joy.

I had the pleasure of experiencing one of those moments with my Dad on my last day of the trip. We had driven out to a remote lake where it was obvious that few fishermen had been lately. We unloaded and I ventured off with my kids to see if I might be able to help the two younger ones actually catch something. As usual, my dad took his time picking out the right lure and watching the lake for signs of life. He picked a spot and moved in.

About 5 minutes later it happened! The usual calm, collected fishermen became extremely animated. He yelled, “Fish on!” At first, I was a little surprised. He is rarely verbal when catching a fish – I’m guessing because he doesn’t want to scare the next one off. But this one was different. This one was special and he didn’t care about the future impact of his excitement. As he landed the fish, he continued yelling, telling us to come take a look.

I hurriedly rushed my kids over to him and saw him holding a 16″ trout. At first glance, it appeared to be a nice fish. Nobody is going to scoff at a 16″ trout but it’s not that uncommon. In fact, about 15 years ago, I saw him catch a rainbow trout that was almost twice this size. But that’s what made this fish so special…it wasn’t a rainbow, it was a brookie!

Brook trout are usually about 7-8 inches long and this one was 16″! Although it’s not going to set any world records, it is truly a special moment for a trout fisherman. And so we celebrated. We oohed and aahed. We took pictures. And all the kids took turns holding the treasure. The big catch!

As I retell this story and consider my dad’s joy, I can’t help but think about my God (click here to be taken to http://www.recklesspursuitbook.com). That he gave us these experiences. These emotions. These gifts.

But there is more here than my gratitude to the Father for these things. There is a glimpse into his heart. A heart that longs for celebration and joy. A heart that will not rest until it is fully experienced.

The drive that the most avid fisherman has to land that big catch is nothing compared to our Father’s pursuit of us. He is constantly chasing us. Watching for signs of life. Luring us with his love. Inviting us to take the bait, to allow ourselves to be caught by him and to be completely transformed. There is truly nothing else that matters to him. Nothing!

For those of us who would join him in this amazing pursuit, a word of warning: he is not after trophies to be displayed. It’s not about showing off or winning some imaginary contest. People are not projects to finish for our God. He simply loves us desperately and he will not rest until he has us. And oh, the party that erupts with every catch!